In one of our OSB process flow we are doing a service callout to a JBOSS hosted service. Our request used to hit the load balancer and then gets routed to different channels. Each channel had a front end Apache and behind that a JBOSS App server. While testing some requests were serviced properly and some of the request were hanging without any reply. It was as if the requests were hanging and no reply comes back from these services. So the synchronous requests started failing intermittently and OSB was not throwing the error back. So it was puzzling as there was no track of the request once it calls the underlying layer.

I was puzzled on why the error was not getting propagated back to the caller. But after 10 minutes there was lot of errors in log files throwing the stuck thread issue which gets killed automatically after the weblogic configured HTTP timeout.

Analysis
As per the Oracle documentation:
we rechecked the Read timeout and Connection timeout values.
Parameters for Configuring HTTP Transport for Business Service 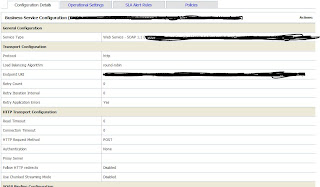 Conclusion
If service callouts are used and the service is via HTTP or HTTPS, then always set the service timeout to an appropriate value.  This should be less than the stuck thread default timeout of 600 seconds so the proxy can handle the problem rather than the server killing the process automatically.
This will need to be done for the business services based on each service requirement.

Posted by Unknown at 3:20 AM No comments:

In code it will be like this
<variable name="Message" type="xsd:string">
<from><literal>HELLO</literal></from>
</variable>


At run time it will become a Assign(0) block and activity shows as before the receive Input.

Posted by Unknown at 3:01 AM No comments:

Visitors to this page

The views expressed on this blog are my own and do not necessarily reflect the views of my employer.